You have to watch this selection of movies from the Drake awards, they are all brilliant!
Posted by Keith Wallington at 16:40 No comments:

The River Wylye is spectacular and the seven and a bit miles under the custodianship of The Wilton Fly Fishing Club must be the best of the best. I have fished the club waters 3 times in 3 years: twice mid winter for grayling and then last Friday, 30 September, to experience the river in the warmer months. On each occasion I have been the guest of Tom Davis, River Manager for the club and Director of the Wessex Chalk Stream and Rivers Trust.

I left home in rural Kent early and met Tom at his house at nine in the morning and already the thermometer was nudging twenty degrees. When we got to the water Tom wanted to position me on a shady beat in the hope shaded fish would be more active given the heat and low water. As it turns out I never got as far as the shade…

The beat Tom suggested was not only attractive due to the shade but also because a few weeks earlier Adrian, the River Keeper, had seen something remarkable from the bridge at the bottom of the beat: Adrian had noticed a grayling lying perpendicular to the current in the tail of the pool. Fish don’t hold at right angles to the current. A moment later he realized why the fish was in this strange position. The grayling was in the jaws of a very large Brown Trout. He thought it probably weighed at least four pounds (the trout, not the grayling). When Tom told me this story I was quite amazed, could the Wylye have browns big enough to predate on adult grayling?!

Tom advised I enter the river immediately below the bridge and work my way up and into the shade. Off I went. I rigged up while keeping out of sight of the water and slipped into the river below the bridge. I worked upstream very slowly. There was no shortage of grayling willing to inhale my #18 tungsten bead biot nymph suspended under a small emerger. Sight fishing to grayling within four or five meters of my feet was so absorbing I had moved only about 50 meters in an hour and a half, still in the pool that flows under the bridge. I got to a slightly deeper hole in the pool with a lot of aquatic weed waving in the current about a meter below the surface.

What was that in front of the weed? I caught a glimpse of a fishy flank, a very long flank. Then I saw the fish. It was truly massive. Was it a salmon? Must be. I thought I’d better not disturb it. Salmon numbers are growing in a poor state in the Avon drainage and I didn’t want to agitate the fish, already probably stressed from the low water level. I started to take a step forward to work around the fish quietly when the sun caught the fish’s flank again: I thought “that’s no salmon, that’s a %^&$£@ brown trout!”. With my heart pounding in my ears I shifted back downstream a step or two. I drifted the tiny nymph past the fish’s nose three times with the fish completely ignoring it. “OK, time to go big” I thought. Did I mention my tippet was of 7X? That’s a 2.4lb breaking strain. I decided to stay with the thin tippet; the four weight Hardy Zenith should be quite capable of absorbing any shocks and protecting the tippet. That’s assuming I can get the fish to eat a fly. I tied on my extended body Mayfly nymph (imitating the big E. danica nymph). 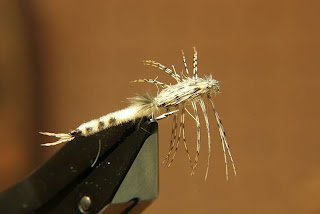 I was fishing a twenty foot leader and with the fish a few meters from me I flicked the duo rig (emerger dry still part of the rig) a few meters ahead of the fish with barely any flyline out of the tip of my rod. Luckily I was right on target with the fly sinking fast enough to make contact with the fish’s mouth shortly. It was around this point where everything went into slow motion. The fish opened its mouth and slowly closed it on my nymph. The fish at the fly! I lifted the rod tip, quite slowly I recall. When I saw the fly just peaking out the side of the fish’s mouth I breathed a sigh of relief because the tippet wasn’t going to be working against the fish’s teeth: A profound bit of luck second only to having spotted the fish without spooking it. The fish swam toward the far bank and the game was on. It never ran far nor managed to bore into weed or mud. The rod allowed me to maintain remarkable pressure considering the very thin tippet. I moved into the pool, waist deep, to avoid the fish getting into some reeds. I am six foot ten inches tall, the pool was deeper than I thought! As I got to waist depth the fish turned and swam at my groin at full speed. I emptied my lungs as my left family jewel took the brunt of the blow!

After about fifteen minutes I landed the fish in a net that was hopelessly too small. One of those delicate things designed to cradle typical wild brownies and grayling. It flopped out twice without breaking the tippet or ejecting the fly (more luck). I moved the fish quickly to the safety of some grass on the bank where I could measure and photograph. It measured somewhere between 28 and 29 inches. It was difficult to keep the fish still while measuring. I moved quickly and then focused on reviving the fish. After about ten minutes of gentle resuscitation in the shallows coupled to more photographs of the fish in the water it was off into the depths, slowly but confidently. 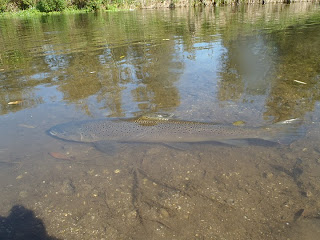 And then reality sank in and a broad smile spread across my face and my heart slowed to normal as I imagined meeting Tom at the rendezvous point in 45 minutes and saying “remember that large brown you mentioned…?”.

The Wilton Club do a magnificent job of managing this piece of the Wylye and fish like this are clear evidence of what a wild fishery can produce if done properly.
Posted by Keith Wallington at 09:44 5 comments: