The Mayfly have started... but the fish want a midge

Well the warm water got them out of their muddy little burrows. Shrugging off those fluffy nymphal shucks and heading for the surface to enjoy the English sunshine.

But the fish didn't seem to be on the mayfly yet.

I got one really good chub on an adult mayfly but the trout were more focussed on an extremely intense hatch of #20 midges. So I threw this little midget at them which did the trick...
Posted by Keith Wallington at 11:01 No comments:

Stalking fish in a crystal clear chalkstream in spring when there is little bank side cover for the [very tall] angler can consume all of your attention. Staying out of sight is one of my priorities. It's either that or trying to look to the fish like a convincing 6' 10" heron... exactly, not likely. But occasionally when I look up I see the most beautiful scenes, like this viaduct. Sometimes man made stuff can be beautiful and complement the wildlife. 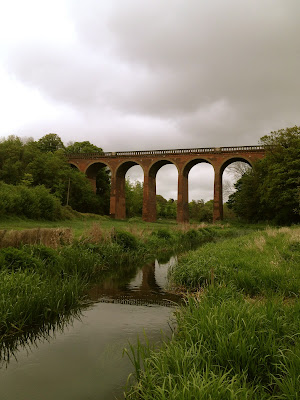 Posted by Keith Wallington at 13:24 No comments:

The Ranunculus are starting to flower 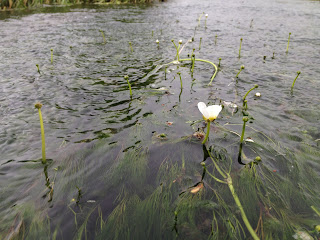 and they are doing brilliantly in the decent flows we've had this spring! I am seeing Ranuncs taking hold in areas I've never seen them before: should make for some brilliant Olive hatches.
Posted by Keith Wallington at 06:42 No comments:

I've blogged about this pattern a few times. I love it. I don't like large nymph patterns generally because they so rarely imitate a natural. But in the chalk streams we have the grand daddy of mayfly nymphs, the Danica. This pattern is outstanding at getting difficult subsurface feeders to pay attention.

I was working upstream on The Darent and came across a fish lying in a swift current that flowed through a hole under a tree trunk. The classic brown trout holding spot. A perfect spot to suck in all that food funnelled from the riffle above. I put a few drifts over him with the Olive emerger I'd selected to imitate the sparse Olive hatch that had been bubbling along since I rocked up 30 minutes before. Nothing. Not even a little twist of a pectoral fin. He was pretty close to the stream bottom, tucked away in his hole. So on went the mayfly nymph. On the first drift he slashed and missed, second drift he didn't miss.

If the fish are moving to the Mayfly nymph does it mean we are going to see the hatch starting in the coming days? We've a high pressure system moving over us this week with temperatures hitting 25 in the South East apparently.... maybe we'll see some Mayfly on the wing...


Tails:
3 emu fibres
Abdomen: Tan or cream suede chenille with the tip singed by a flame

Gills:
Tuft of partridge filoplume tied in behind wing case tie in point

Wing case:
Larger heavily patterned feather from the back of a partridge. I sometimes apply some UV resin to the wing case for extra weight, robustness and appeal.

Legs:
Smaller neck feather from a partridge tied in after the wing case and pulled over the dubbed thorax.

Thorax:
Tan blended dubbing. If you want to weight the pattern you should wrap tungsten or lead foil/wire around the shank before dubbing the thorax.

Head: After tying down the wing case make 2 turns of thinly dubbed thread over the wing case tie down point and fold the wing case material back, over this dubbed area and tie down. Clip off the excess partridge feather.
Posted by Keith Wallington at 06:31 4 comments:

I nipped out for a few hours on the Darent to marvel at the fantastic flows the rains have brought and of course to see if there were any fish looking up. The wind was up so I decided on a walk through a stretch we call the "hop garden" because it's in woodland and probably a little protected from the wind. We did some major river habitat restoration work in this stretch winter past so this was also an opportunity to ogle at the new upstream deflectors in action, scouring out gravel beds in the high flows.

I had the 9' 4wt Zenith with me. I'm developing serious affection for this rod now, almost to an unhealthy degree. I woke up this morning with mental images of tight loops and accurate casts to rising fish. Do I tell the wife about this in a plea for help (do I want help?) or will she think I'm (even more) weird? I didn't think I'd see any risers so I didn't string up, I just held the 4 sections in my hand and strolled the bank watching. And Murphy's law was invoked, as I thought it would. A riser. Far bank, under a tree. Every 15 or 20 seconds. But to what? 1 or 2 olives are were loitering looking for a mate but nothing enough to produce this rise frequency. What's that crawling up my neck? A hawthorn. Aha! Strung up the rod, went into stalking mode. Made the cast... Caught the willow branch above the fish. Tugged and the fly came free. Another cast, looking good, drifting... Gulp.

Didn't see any more risers. Made no more casts. Smuggly completed my walk and went home for a pint of bitter. My hawthorn pattern is only a few seasons old and has been through a few evolution to the point where I think it will stabilise in this form for some time. It sites quite deeply in the surface and looks suitably in disarray and nonplussed with its situation. The hook is a  Grip 14723BL, one of my favourites 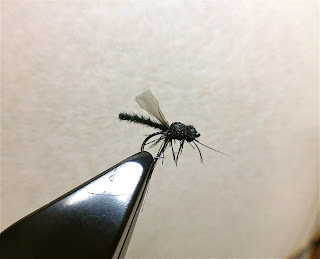 The Micro chenille extended body and black CDC legs/abdomen are the key pieces I think: they produce the right silhouette of "tangled mess" unique to a downed hawthorn.

Hopefully I'll be throwing it at Usk browns with my mate Mark next weekend...
Posted by Keith Wallington at 08:58 No comments:

Last weekend, in amongst the rain, I got lucky. The forecast showed a gap in the rain on Saturday afternoon with a light wind and cloudy skies... Seemed like perfect conditions for a good Hatch of olives, either Large Dark or Blue Winged.

As it turns out both came off in really good numbers. The fish were looking up and eating well-presented emergers and duns. I used my Hardy Zenith 9' 4wt again as I have for almost all my early season outings to the Darent near home this spring. As it bushes over later in the summer I'll probably unsheath the 6'9" 3wt G Series Scott but for now the 4wt Zenith is the right rod. I loved this rod from the outset but it's amazing how it continues to grow on me. Bloody marvellous thing it is! 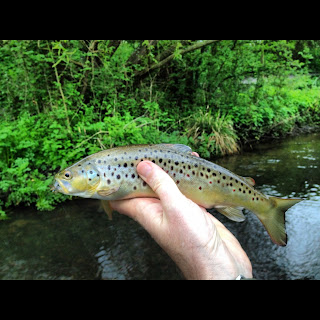 The patterns that did the damage are pretty simple and tested over quite a few seasons, rivers and continents now although I do like to tweak them from time to time. The latest evolution being a subtle sparkly dubbing for the thorax on the emerger.


Could be this is based on some sense that the natural has a little sparkle to it but I think it's more likely the "shack nasties" this last winter had me wanting to bling things up a little. Just a little mind you. 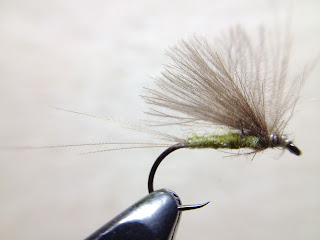 The other pattern, a regular of mine is the CDC upwing adult... from #10-18 this thing always work in an upwing hatch or spinner fall. I use CDC fibres for the tail too, because they are surprisingly robust. It takes a good few fish (or casts into trees) to damage the tails.
Posted by Keith Wallington at 08:22 No comments:

A weekend on the chalk streams of Dorset

My mate Jacques and I cracked an invite from John Grindle to fish the Dorchester Fishing Club water last weekend. It's a lengthy drive from my house in the South East so John suggested we fish for 2 days, the second one on John Aplin's incredible mile of the Frome.

We fished the Piddle on the 1st day because the Frome was still pretty high and a little dirty. The Large Dark Olives were coming off in enough numbers to have the little wild browns looking up and we we managed to get a few in the morning. The afternoon was warm, sunny and still and we worked our butts off to little avail.


So we got off the Piddle a little early, met John Aplin and went to have a walk along his stretch of the Frome... a sneak preview of the water we'd be fishing in the morning. This is classic chalkstream but somehow unique in it's character. A truly beautiful bit of river, full of wild browns and grayling of Jurassic proportion (sorry no pics).

It's not all manicured bank stuff, a good portion has bank side foliage along it's length and the amount of ranunculus and other aquatic weed is incredible. All that habitat produces huge amounts of fish food. The shrimp, BWO and LDO populations are huge and on day 2 we picked off enough brownies on imitations of emergers and adults to make us think we were fairly competent. No huge browns, but I'm sure they're there.

At about 3pm Jacques and I split up, we'd been spotting for each other to that point. I moved upstream, he down. I got a few more browns, some of them proving very challenging even on 7X and what I thought were good drifts produced by the Zenith 10' 3wt. And then I saw the behemoth. The largest grayling I'd ever seen. 4lbs? very possibly. I spent about a half hour stalking this thing and there was no way of getting a decent drift to it. Then its mates arrived: 2 more monster grayling. So, there I was staring at 3 massive grayling and no way of getting a drift to them. what did I do? What would you do? I kept staring. Until 6 that evening. Yes, I spent the afternoon just watching these things moving around in a 20metre area but never providing me a drift. I walked away a few times to recompose myself and get a finger hold on my sanity again... and then I went back, sidled up behind one of the 2 trees I had come to know very well through the afternoon, and stared.

The story ends well. While I was mid crisis Jacques was downstream landing 50cms of grayling. yes 50cms. He was a good 600 yards downstream from me. He tells me he screamed his lungs out trying to get me to him to take a picture of this thing: He had left his iphone in the car (who wants to take calls on the river) and the compact camera's batter was flat so he never packed it. Jacques' a pretty solid guy so I've no doubt he got a fish of 50cms and John Aplin estimated it at 4lbs. I think he knows the bigger fish on that beat fairly well and he told us the Frome and Dove grayling are of a sub species that is much heavier for their length than other strains.

Amazing water, available on day ticket and an amazing fish. Thanks to both Johns for their great company too!

Posted by Keith Wallington at 07:57 No comments: