The Wilton Club stretch of the River Wylye 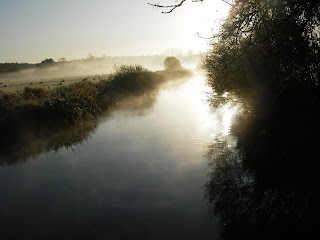 On Saturday I was privileged to fish this amazing Wiltshire chalk stream as a guest of member Tom Davis. Tom and I met at the Spring show in March this year and when we got onto discussing grayling he suggested I should experience the grayling of the Wylye.

we fished a few of the club beats and they all produced grayling and a few out of season browns. The fish came mainly to the nymph in the morning but in the afternoon a good large dark olive hatch came off and we were into them with dries. We got quite a few fish, nothing huge but all were very strong and full of beans.

Tom got fish on a little parachute emerger with an antron trailing shuck and I got mine mainly on my "bootlace" adult olive which is a combination of CDC and, literally, boot lace fibres... the stuff floats like a cork: I discuss this pattern in "Fly tyers of the World Volunme 1".

The Wilton Club has been around for 110 years and on the Wylye for about 100 years, so there is some history! We had lunch next to the river, about 50metres from us was a small, simple fishing hut. Tom told me that Skues had sat in that hut and had caught his last trout just upstream of it in the weir pool. Apparently the hut is featured in the book "Fishing Huts" by Jo Orchard Lisle.

The club does an amazing job of maintaining and rehabilitating the stream. Salmon are spawning on the property which is wonderful. Tom showed me a number of areas where the club was doing various bits of rehabilitative work on the river bed and banks.

Sorry there aren't many photographs, it was really cold and the last thing on my mind was getting out the camera.

what an amazing day's fishing, thanks Tom.
Posted by Keith Wallington at 20:13