My mate Jacques and I fished the Lambourn in Newbury yesterday. This is a very pretty little chalkstream with a good population of Grayling. we fished the Donnington Grove beat, which flows past a golf course so there were a lot balls in the water... I didn't get used to that. 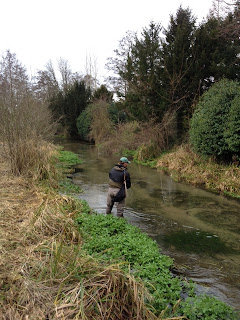 The water was extremely low, really worrying given we're in mid winter and in a drought.

We were looking for grayling and we did find some but they were extremely difficult: maybe because of the low water, maybe because there were huge amounts of stocked browns everywhere. It was difficult to keep the fly clear of stockies in some areas.

Eventually I got a grayling to play ball. He was right against a bed of cress on the bank, nosing about in the silt. We had seen the odd redd, with some wild browns managing to spawn in amongst the stockies so i decided to try a small egg pattern... as the silt cleared from his nose he saw the egg coming downstream at him and he lunged forward and had it! 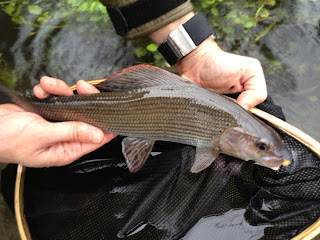 The river had a good head of wild fish so it made no sense to stock at all, especially some of the leviathans we saw charging up and down the river freaking out the wild trout and grayling.
a bit surreal but a good day anyway...
Posted by Keith Wallington at 14:15