I finally got it on the water and it is a remarkable rod!

Last year I fished the Zenith 9' 4wt in Poland (see the post) and I was very impressed. I was fishing with Jeremy Lucas and he and I are both fans of longer rods for superlative dry and subsurface presentation and connectivity: But I've always been a little disappointed by the tip heavy feeling I get when fishing 10 and 11' rods. I told Jeremy how I thought a 10' 3wt Zenith could solve that problem because the ultralight Sintrix thinking could produce a 10' rod that was balanced on the grip, without that heavy tip feeling. It would be a rod that would "feel like it almost floated in your hand". But Hardy hadn't produced a 10' light  line weight Zenith yet and we didn't know if they were going to.

So I got back from Poland and got on the blower to Steve Peterson at Hardy and, well, one thing led to another and the rod was delivered in late January. Along with a new CC 2000 reel. I got the outfit together on the lawn (couldn't wait to get onto water) and it felt magnificent, but that's the lawn and the lawn is no substitute for casting the thing on water, with flies attached, and in anger. The 2 streams I fish around home are both small (one chalk and one silt substrate) and not really suited to a 10' stick: But on Sunday, with the season open, I got onto my stretch of the Darent, the chalkstream, here in Kent. I figured with the bank side foliage still very low after the cold winter the 10' rod would not put me at a disadvantage (by late summer I am normally flicking my 6'10" 3wt in amongst the foliage). 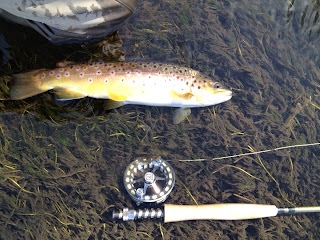 Howard Croston,  the designer behind the Sintrix range, has once again applied himself with incredible results.

This thing is amazingly light in your hands, there is no tip heaviness whatsoever. Very importantly the rod is not merely a 10' 3wt version of the meatier 9' 4wt. It has been perfectly tuned to the job of a long light rod: It is much slower than the 9' 4. It is a paradox in that it is a crisp yet smooth mid action rod. It doesn't produce that sluggishness you normally get from a mid action rod because it is so light. There is no sense of "heft". Of having to thrust it forward and back. It is smooth, delicate and effortless, and yet not overly fast.

This is not a one trick pony. It is remarkably versatile. A more open loop or very tight, wind-cheating arrow are both equally available to me. I caught myself moving between the 2 and smiling to myself, a lot.

I fished both single dry and duo rigs and the rod effortlessly excelled at both. I was working a 15' leader tapering to 7x and it turned over perfectly, unless I duffed the cast.

I only fished for a an hour or 2 after having taken up a chunk of the morning stringing up extra barbed wire to deal with a poaching problem we had last season. But I had more than enough time with this rod to know I want to fish it a lot more.

I've got to be in South Africa for 2 weeks and if I take a rod at all it'll probably be salt stuff, so the 10' 3wt will have to stay at home. But late April it's the Frome, then the Usk hopefully, then more on the Darent, then the Wye and then, in July, it's Slovenia, where this little gem is going to put on some serious miles.

I'll let you know how I go.

Once again the Hardy team blow my mind. Well done guys!
Posted by Keith Wallington at 08:51